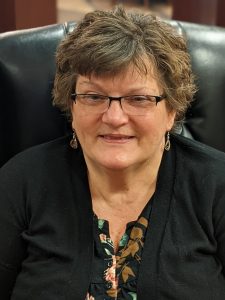 Diane started working at Le Sueur State Bank (now known as CornerStone State Bank) after graduating from Mankato Commerical College in 1979, as a Legal Secretary.  She started at the bank as the Head Teller and then advanced to Proof Operator/Back-Up Bookkeeper.  After a few years, she obtained her dream job of being the Secretary of the bank, which she did until her third child was born in February 1989.  After her youngest started kindergarten, she went back into the work field and in May of 1995, joined CornerStone State Bank as Secretary again.  In 1999, Diane started processing real estate loans, which she did until October 2009.  At the time, she was offered the Vice President position at the newly formed Montgomery branch of CornerStone State Bank, where she worked until being offered the position of President in October 2022.

Diane is currently the Treasurer of the Le Sueur County Pioneer Power Association, which ties in with her upbringing as she grew up on a dairy farm near Waldorf, MN.  Since moving to Montgomery, Diane completed a partial term on the Planning & Zoning Committee and was the Social Media Chairman for the Montgomery Chamber of Commerce.

Diane has been married to Bill Radil since July 2010 and they currently line in Montgomery, MN.  They have two sons, one daughter and four grandchildren.  Diane loves spending time with family, especially the grandchildren.  She also enjoys hanging out with friends, watching TV, gardening, playing games/cards and traveling.

Diane has worked mostly with Consumer/Real Estate Mortgage Lending.  But, has also been in charge of the underwriting of real estate loans and taxes/insurance escrow maintenance.  She is proud of becoming a part of the Montgomery community.