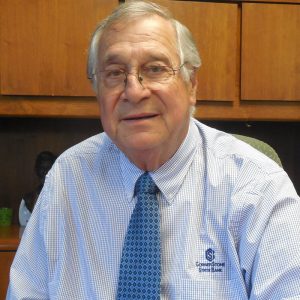 Bruce’s personal banking career started upon advice from the President of the American State Bank of Moorhead. He grew up on a sugar beet farm north of Moorhead. Upon attending the University of Minnesota and later graduating from Moorhead State University with an administration/finance degree, he joined the office of Comptroller of Currency as an OCC examiner in 1966.

Bruce has continued to stay involved in the Le Sueur community as an active Rotary and Le Sueur Industry Development member. He has previously held the role of Le Sueur EDA commissioner for 14 years. In 2016 Bruce was honored as a 40 year Banker/Businessman in Le Sueur and joined the Minnesota Bankers Pioneer Club, which he is pleased and excited to follow many career bankers in a wonderful industry. An industry where we help all consumers, with deposits of checking, savings and CD’s along with short and long term loans for purchases; business, industry, and governments with their day to day needs in deposits, loans, and management advice. The industry is truly on the ground floor elevating many to prosperity.

Bruce’s main home is in Le Sueur, Minnesota, but with the aid of modern technology and a great staff he continues to work full time from his winter home by Sarasota, Florida with his wife Carol of 51 years. When Bruce isn’t working you will typically find him at the golf course, gardening or spending time with his wife and eight grandchildren. His latest accomplishment was “shooting his age” during a round of golf on his last birthday.